About two months ago I started my first gun engraving project – STI Trojan. Today finally this saga has come to a successful finish. Here’s the final result: 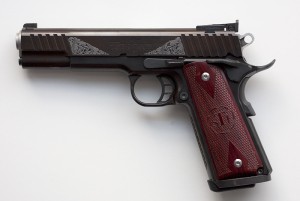 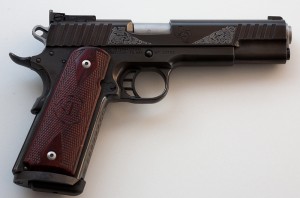 The main reason it took so long to finish this project was the problem with hot bluing. At first I used my home-brew bluing salt, which worked out rather well the first time. I got really nice deep blue-black finish and was quite happy about it. But as I was lightening up the engraving with phosphoric acid, we call the process ‘French grey’, some of the acid accidentally spilled to other parts of the slide and messed it up. So I had to remove all the bluing and redo everything again. Long story short – I got the bluing right on the fourth try, after buying a commercial salt from Germany and learning severals lessons from my silly mistakes.

Here’s a little walk-through of the whole project.

First of all the original blue has to be removed and parts refinished, so they are worthy of receiving a good engraving. Here’s the slide ready to go, after 4 hours with sandpaper and sticks: 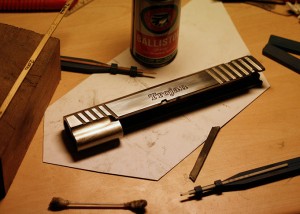 The design is transferred to the slide and ready to be engraved: 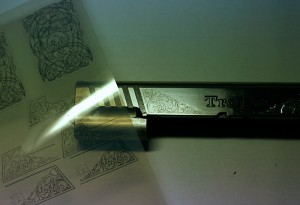 Engraving is finished, but still in the white. Time spent so far – about 20 hours:

Now comes the bluing process. First and foremost, the metal to be blued has to be really-really clean. Every drop of oil and fingerprint will leave ugly spot on the metal and we don’t want that. Hot bluing is done in a salt at temperature 150-180C. The solution is alkali, so if it gets on your skin at that temperature, you’ll have an interesting experience. In a bad way. 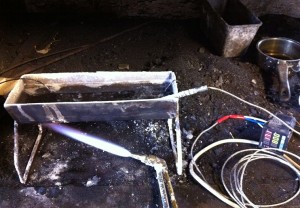 Next up – French gray. The area to be grayed has to be masked off, the cheapest fingernail polish works well. Applying mild phosphoric acid to the area will remove the blue and makes it gray. Black background and gray engraving looks rather good and the contrast helps a lot for the visibility. 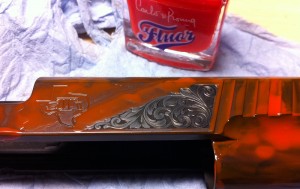 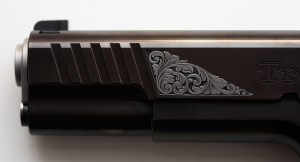 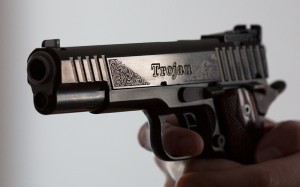